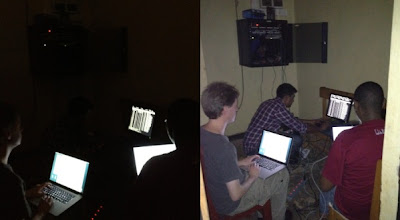 6 days until the RHEA meeting in Kigali. The countdown continues. That noted we’ve had quite an eventful weekend. The JHS team pushed hard on Saturday to get the Ruhunda site to a working solution (this continues today – Tuesday).

We had some fun and games this weekend with heavy rain and no power for some stages, having the team working on the UPS for the server to get as much time as possible on the systems. We spent a good bit of Saturday working on patching together a network infrastructure in the interim (the MoH will rollout the updated network later on). There was an atmosphere of adventure with the guys working in the dark / by monitor light / by phone-torches, taping cables in place, checking network points, installing temp switches, pushing to get the internet connected and available through the Health Centre, not to mention the continued testing and tweaking (finding and fixing bugs) that come up when you lay down code in a real world setting.

Nevertheless the weekend was quite an adventure. One of the key points that raised itself is that your field work is not uneventful and that just because it works in the lab it doesn’t mean it will work seamlessly in the field – expecte field bugs to crop up.

While the developers continued at Ruhunda to test against the lab HIE and now NDC HIE, I left for Rwamagana Hospital and Health Centre to check if there was any infrastructure challenges we needed to address this week. I was fortunate enough to be able to view the infrastructure of the Health Centre and Hospital (they are adjacent) [remembering that it was a Saturday – the Health Centre workers and MoH have pulled out the stops and have shown their dedication to the project though making sure people were available to meet us]. Our one challenge at Rwamagana was that there was no network point available at the ANC registration area (we had a 30m cable on hand to install as an interim solution). Beside this the Health Centre and hospital are technically ready for the system (bar the internet outage caused by the storm on Sunday).

Monday saw the team back out to Ruhunda. We have focused on Ruhunda as it was the “most ready” in terms of users and projected infrastructure. We have worked closely (and continue to) with the MoH teams to define a checklist for the other sites to ensure they are system ready (i.e. all hardware and network is ready for us). In addition to the Jembi team we were joined by Gilbert (MoH), Liz (RHEA-MoH) and Dawn (MoH-Reginstrief) to review the work done and the “temp” additions the Jembi team had made to the network as well as to “see what we are working on” at the Health Centres. With the teams out at Rununda we finally had the internet up and “stable” with the MoH having an understanding of some of the challenges we have faced and how they have been mitigated. It really does make a difference walking someone through the challenges and fixes to make sure we are on a common understanding.

Our teams continued to test the system and code out bugs / add fixes from the field while Liz and Dawn looked at some of the ways of doing back data entry and Gilbert and the team looked at the infrastructure. While we had hoped to be live and running at Ruhunda by the end of the day we didn’t make that due to some challenges in the PoC module and our team is back out today to remedy this as best as possible in the time remaining.