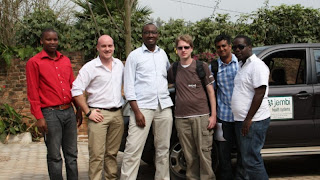 Yesterday has been quite a day for the JHS-RW and RHEA team as we mustered our forces and had a full charge at our implementations; 2 vehicles loaded with teams went out to 3 sites (Ruhunda, Musha and Rwamagana). We sent out the technical team in one car; dropping Hannes Venter ( Teams ready to head out!

Our focus was to get teams to the 3 sites to ensure that we are all working as efficiently as possible. Focused on testing Ruhunda, installing at Musha and making sure that Rwamanagana is upgraded to the latest OpenMRS.
Our second car was loaded with Michel, Liz and Myself (later picking up Eric from MoH). Our team was really the overview and gap filler today. Something that we picked up from yesterday was the need to follow the old South African saying “‘n boer maak ‘n plan” (translated: a farmer makes a plan) and in this we set out to stock ourselves with a few key things that formed part of our “implementation kit”. Given that the health centres were networked by an outside team we would need to be aware of what we may need to have on hand to meet our subtle changes. Thats said, it is surprisingly easy to find what you need in Kigali (I said easy not fast). We spent a large time of the morning getting spare network cables (fly leads; 5m and 10m combinations); extension power cords, duct-tape (or similar), spare modems; and working with MoH teams to take out bar-code readers, printers and labels. All this and a swiss army knife and we made our way out to follow behind the technical team.
Quite a day and a tough day on many sides with power failures at the sites forcing teams to drain the UPSs to keep the servers up and running and getting as much done as possible. To quote Wayne; “Everything is running on empty, UPSs, Laptops and Developers”. It was a long day and during it we’ve achieved a few key things:
Musha has been loaded with all PoC modules and all providers were loaded into the system. We are heading out today to complete the testing of the site and load the Ubudehe data set; in the testing we are aiming to test the site connection (internet connection) as well as the modules connection to the HIE.
Rwamagana has been upgraded to the correct version of OpenMRS and we have part of our team heading out to Rwamagana today to begin the installation of the modules and testing before loading the Ubedebe data sets.
Ruhunda is “bucking a bit” and giving us some physical infrastructure challenges but we are working closely with MoH and clinic teams to remedy this as soon as possible. The OpenMRS system is installed with our modules and as soon as we get connectivity (3G modems are not functioning well in the area) we are able to test with the HIE. The team has both internet consultants (Satellite company) and network staff out with them today to work on pulling it all together. 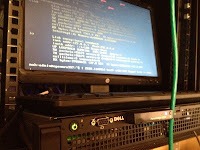 Ryan is working on knitting together all registries and services in the HIE which have been stood up in the National Data Centre (NDC) in Rwanda and we should have some great progress on this today. Once these are up and running we are able to start to pull data through the entire HIE system, from Clinic to Cloud (the HIE in the NDC).
We have had some challenges with loading the Ubudebe data as it is quite a data set to load (takes approximately 4 hrs) but the teams will be working over the weekend to ensure that the 3 sites are correctly loaded with the Ubudebe data ready for clinical work next week.
As always watch this space for the next update and follow us on twitter http://twitter.com/jembi_hs and use the hashtag #RHEA_HIE.